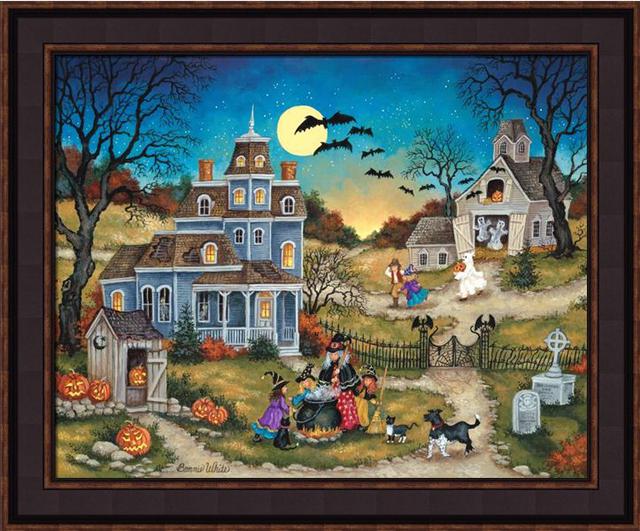 "Three Little Witches"
$115.00
$15 Shipping/Handling
It's Halloween night and local children hurry past this spooky home on their way to trick or treat.  Out back the old witch is teaching her three granddaughters how to brew up a big black pot of spookiness. The Pumpkins are set out to scare those who come down their path.....and what's that in the window? 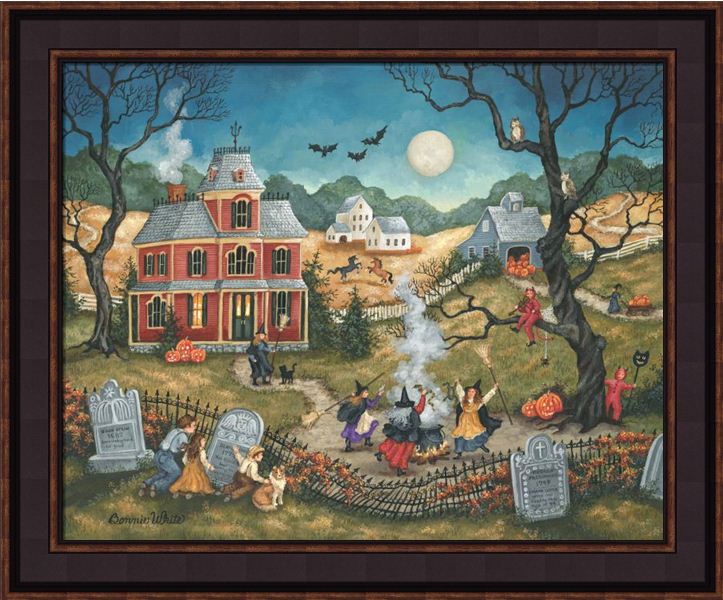 Three young children hide behind a gravestone on Hallows Eve hoping to learn if the tales of Witchcraft they've overheard are tact or fiction. They're in luck. Witches dance around a steaming cauldron as two little devils play the fiddle and another peeks from behind a tree.
$15 Shipping/Handling 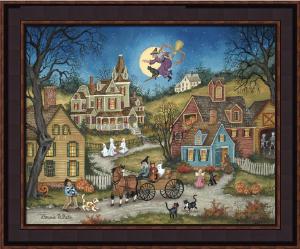 There's a full moon, the jack-o-lanterns are aglow and trick-or-treaters are out in full force. An old crone drives a wagon full of anxious children by not one, but two black cats. While Mr. and Mrs. Bones peek from the safety of they haunted barn.
$15 Shipping/Handling
This page was last updated: February 11, 2022
©bonniewhitefolkart.com 2006-2022
1 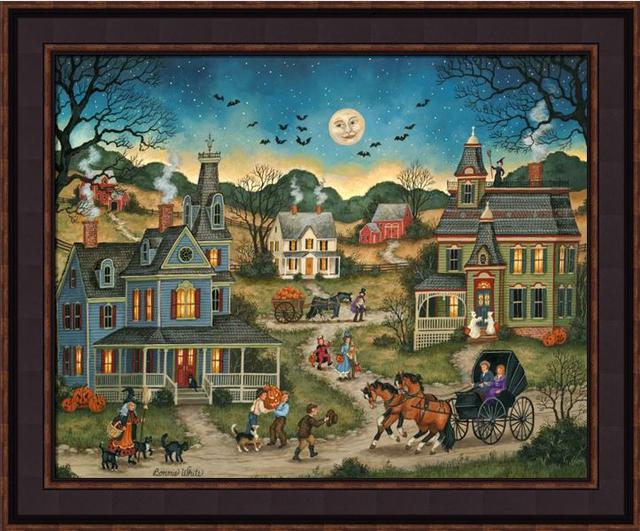 "Hallow's Eve Hooligans"
$115.00
The "Man in the Moon" keeps his eyes on the bats that fly overhead as mischief ensues below. Trick or treaters walk reluctantly towards the next house when they notice the commotion ahead of them. Two young hooligans hold up an evil looking Jack o Lantern while another yells and waves his hat spooking any horse or person that comes their way.
$15 Shipping/Handling 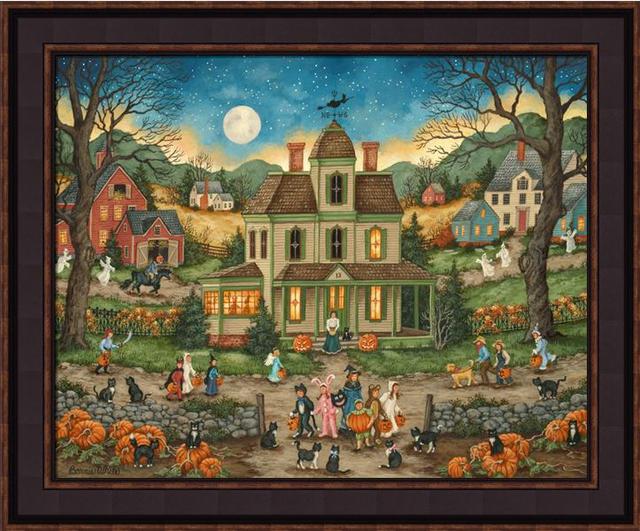 "Lucky 13"
$115.00
The headless horseman gallops down a dusty back road while ghosts float about aimlessly. Below them, Trick or Treaters walk through their neighborhood in search of candy corn, chocolate bars candy apples, and popcorn balls. Six brave youngsters that have decided to cut through the pumpkin patch, count 12 black cats. Just behind them sits the thirteenth cat, safe on his owners porch.
$15 Shipping/Handling 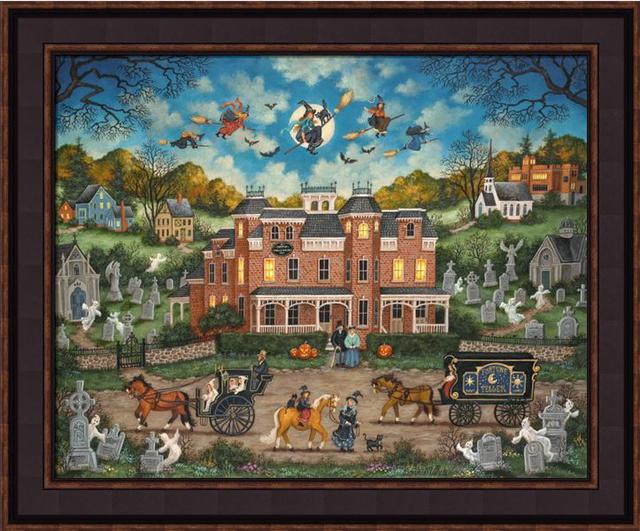 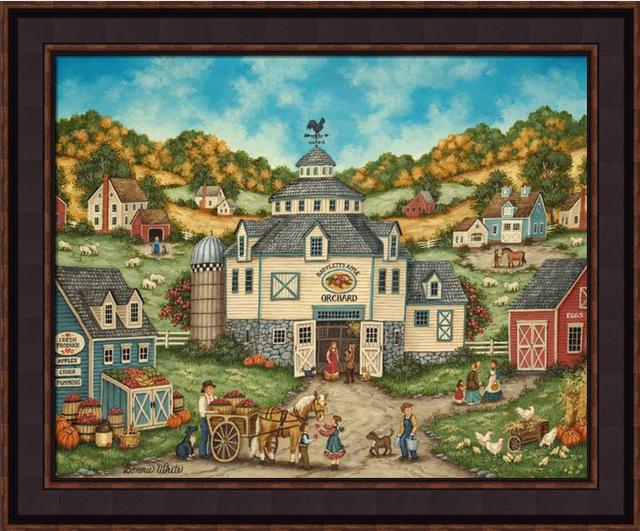 An abundance of pumpkins, vegetables and barrels of apples surround the little blue farm stand. It's been a banner year for apples at Bartletts Apple Orchard. While the farmer their horse a
well deserved treat.
"Bartlett's Apple Orchard"
$115.00
$15 Shipping/Handling 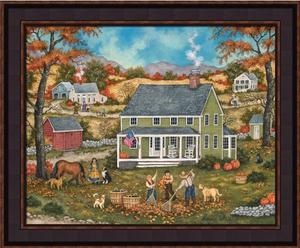 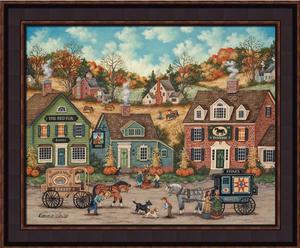 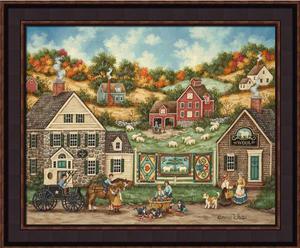 My Giclee prints are board-mounted with a faux finish  resembles an original painting.
Each print measures 16x20 and comes with a lightly distressed, black frame. The finished frame size
is 20"x24. This item ships directly from my supplier. Please allow 2-3 weeks for delivery. Proudly made in the USA. Ships to the continental USA only
Pumpkins and Cornstalks add a festive touch to the Red Fox Inn and Black Horse Tavern. While one wagon passes through delivering holiday pies,
another parks roadside as a woman inquires about the price of a quilt. As the women negotiate,
a boy and his dogs run to greet an old friend. 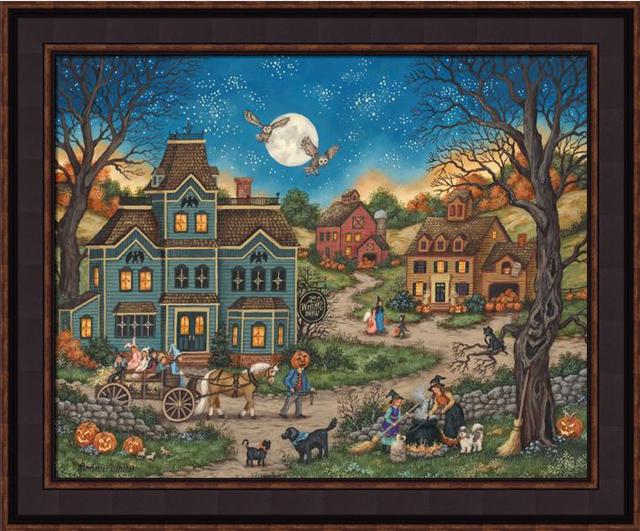 Mr. Pumpkin leads a horse with a wagon
full of Trick or Treaters for a haunted hayride.
Jack o Lanterns glow while two witches stir up
a tasty brew for Halloween. Three field mice to
the left and one on a pumpkin to the right
proceed carefully as owls are on the lookout
for their next meal.
Hooked rugs hang from a fence, echoing the golds, oranges and reds seen in hills behind them. While two women exchange gossip, children watch as three kittens find a basketful of fun and proceed to attack the colorful balls of yarn.
Frosty nights have brought beautiful autumn foliage to the trees in this valley but it's not long before they begin to fall to the ground. Two young boys help their father rake leaves into piles as their four dogs along with their mother who is grazing the families' horse supervise the never ending job. 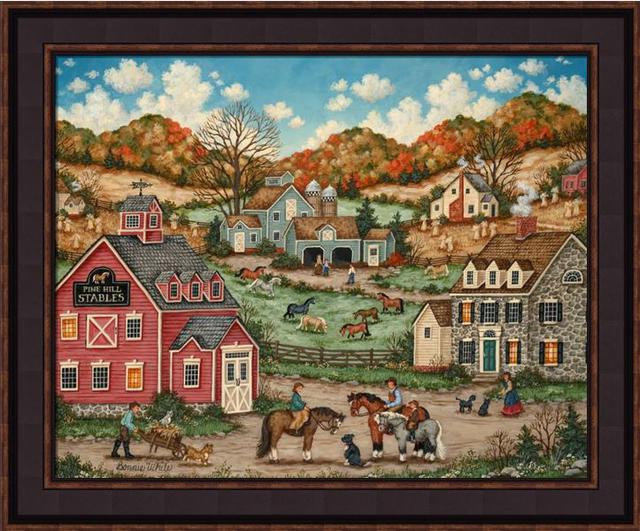 $115.00
$15 Shipping/Handling
Colorful foliage, a crisp blue sky and cornstalks bundled in golden fields signal that fall has arrived.
As a family on horseback prepare to leave for
the afternoon ,their dog waits patiently, hoping to tag along . 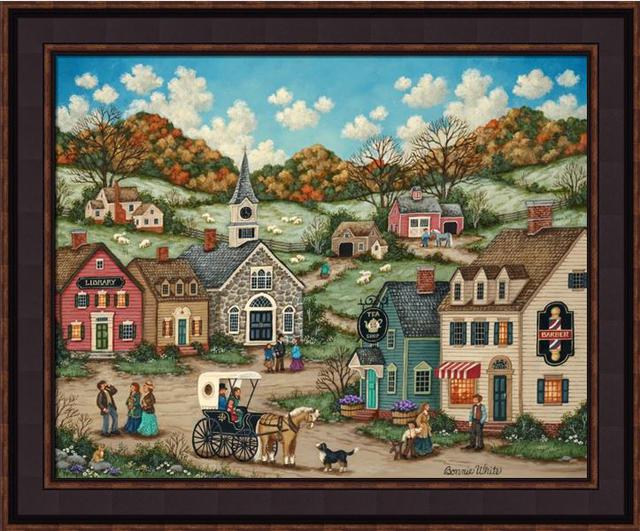 $115.00
$15 Shipping/Handling
A mild autumn day has brought people out of their homes to enjoy the fall foliage. While a mother brings her son to the barber for a much needed haircut, a dog wanders into the road, holding up the one wagon traveling through town. ​
"Along for the Ride"
"Road Block" 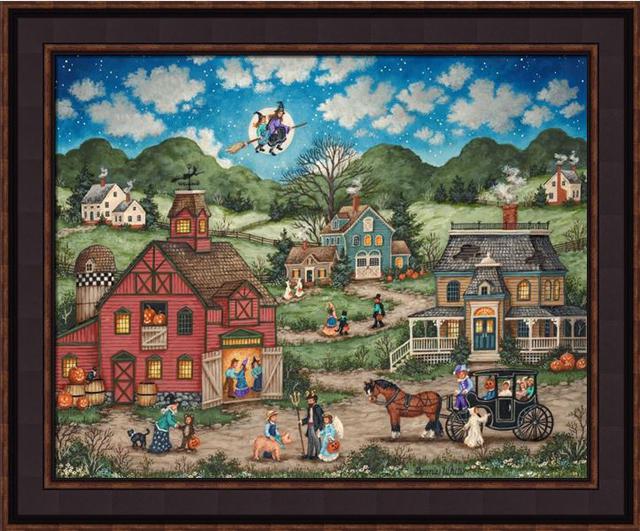 $115.00
$15 Shipping/Handling
Trick or Treaters finish up their rounds as others begin to gather for the annual Halloween Hullabaloo. While a little bear has his costume adjusted, an angel and devil greet a boy with his pig, and a wagon full of costumed children arrive. Meanwhile, two witches fly by keeping watch over the evenings festivities.
"Halloween Halabaloo" 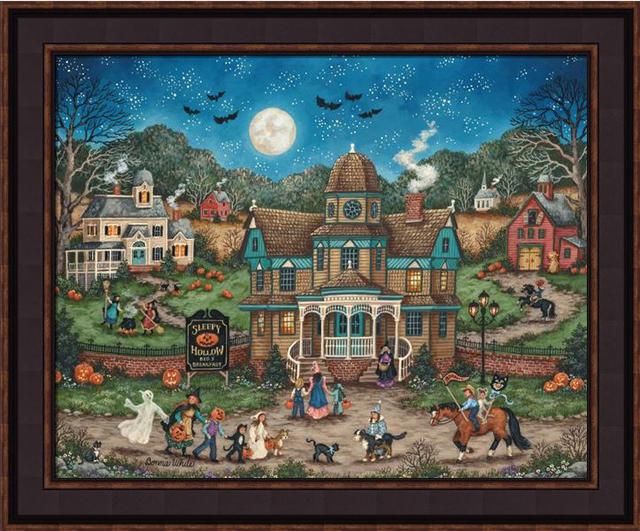 $115.00
$15 Shipping/Handling
Bats flutter above Sleepy Hollow, keeping watch
over the evenings trick or treaters.While witches dance around their cauldron and the headless horseman's steed rears in excitement, a little
ghost tags along with a group of
children out for a night of mischief.
"The Tag Along" 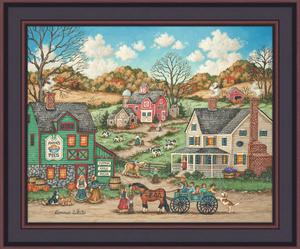 $115.00
$15 Shipping/Handling
The scent of apples, pumpkins and cinnamon hang in the air, tempting anyone that happens to pass by Annie's Pie shop. Fresh out of the oven and made to order, an aromatic apple pie is handed to the mother of a large family that wait patiently in their wagon.
"Annie's Pies" 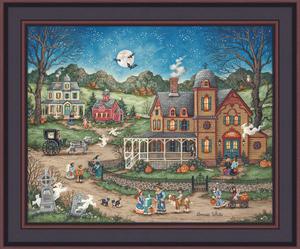 $115.00
$15 Shipping/Handling
Bats fly overhead keeping watch over the trick or treaters out for a night of mischief. As costumed children travel from house to house, curious ghosts peek around gravestones and fly overhead enjoying the otherwise quiet streets.​
"A Ghostly Good Night !"